I’ve been dragging my feet writing posts about my travel, because I often find travel narratives, especially by non-travel writers like myself to be very dull: I went here, saw this. I went there, saw that. (Of course, I love this travel writing.)

The travel books I like tend to either be about cold places, like The Magnetic North by Sarah Wheeler, or books about very entertaining people traveling, like In a Sunburned Country by Bill Bryson, or the best of both worlds, Travels in Siberia by Ian Frazier. Well, the Faroes are in the far north, but while I hope to be an entertaining writer, I’m not sure I am entertaining as a person.

But I shall try. I wanted to go to the Faroe Islands because I have some action in The Sea Queen set there, and it’s always better to see a place in person. 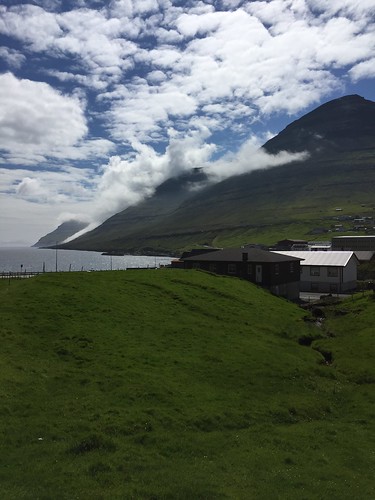 The Faroe Islands are north of the United Kingdom. If you sailed in, for instance, a viking ship, from Bergen, Norway, to Iceland, you would run smack into the Faroe Islands. Today they are an autonomous country within the Kingdom of Denmark. Like the Scottish Isles and Iceland, Irish monks were some of their earliest settlers before more settlers came from Norway during the Viking Age. There is also some evidence of settlement beyond the Irish monks from 400-600 AD. The Faroese language is similar to other Scandinavian languages, but it contains many more words borrowed from Gaelic, and its pronunciation rules are very different.

Side note: When I was in the National Museum in Iceland, I overheard some academics, historians of Icelandic Sagas, and a computational linguist, sort of smirking about how one of their friends had to have “viking” put in the title of his book, even though it’s actually about early medieval Scandinavians. To which I say Thhhhhbbbbpppttt. (It’s a technical term.) The Viking Age is defined as the years between 794, when vikings attacked the monastery at Lindesfarne, and 1066 at the Battle of Hastings. During that time, Scandinavian sailors, as well as sailors from the Baltic, expanded out from their homelands. Many were farmers. Some were chieftains or kings. They traded or raided, depending on what seemed more profitable. They started to wage longer wars and settle in some places. These people are known to us as vikings. There is no sharp delineation between who was a viking and who wasn’t–in fact, aside from knowing that “vik” means “bay” or creek, the etymology of the word viking is a bit hazy. There’s really no problem with calling early medieval Scandinavians vikings as a shorthand, as far as I’m concerned. Especially if you want your book to sell outside of academic circles.

We arrived in the Faroe Islands just a few days after midsummer, and they are far enough North that it never gets dark. The sun doesn’t even dip below the horizon until just before midnight, and it’s up and shining again by 3am. Even when it’s down, the sky stays blue and orange.

We used AirBnB to stay in an 19th century house in historical Torshavn with a lovely hostess. On our first full day, we took a helicopter ride to Suderoy, the southernmost island, flying over and landing on other islands on the way. The smallest, Litlá Dímun, is uninhabited, and the second-smallest, Stóra Dímun, only has one family living on it. The weather patterns mean that it rains almost every day. The islands gather clouds to them that sit on the crests like a grey felt cap. Deep fjords cut through the islands, and down the fjord walls cascade more waterfalls than I’ve ever seen in one place before.

As we were flying over the islands, we saw a lake sitting on top of a cliff, like this one. (I did not take this picture.)

On Suderoy, we went for a 6 mile hike through some fields full of sheep to a hidden lake. I have never seen more sheep in one place than in the Faroe Islands, and I have been to Ireland, Iceland, and New Zealand. Also, wonderfully, at least half of them were black or brown sheep. None of them wanted us in their fields, and complained bitterly, in a hilariously passive aggressive tone. (Or maybe I’m projecting.) 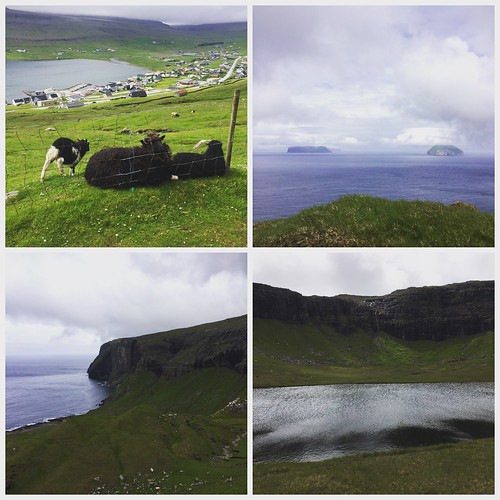 The Faroese notion of “an obvious path” is somewhat different from mine, even having grown up in the middle of the woods, following deer trails from a young age. So we lost the path a bit, but luckily we had a pretty good description of the path, and knew generally where we were going. And since the Faroe Islands have no trees, it’s hard to get lost. At all the points when we didn’t know where we were going, we could look back and see the town we needed to get back to at the end of the hike.

When we were finished with the hike, we took the 2 hour ferry back to Torshavn, and watched the cloud-capped islands go by, as the ferry went through water black as ink.

And I guess I’ll save the rest of the Faroe Islands for following post. Next: I find out what seagull tastes like.