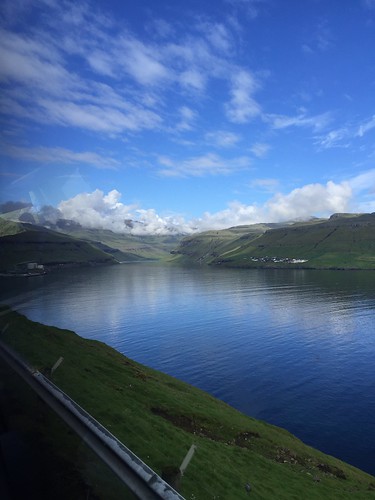 On our second day in the Faroe Islands, the Wanderer’s knee was hurting from the hike the day before, so we took a bus to Klaksvik and walked around. The Faroe Islands are so beautiful that just getting in a bus is a guarantee that you’ll see something lovely, like a million waterfalls cascading down fjord walls. Most of the Faroe Islands are connected by long underground tunnels, hewn out of the rock, and in one of those I saw something very grim: bicyclists.

You see, this tunnel was at least six miles long, with a 15% grade down to the lowest point, and then 15% back up, through the dark, with rough carved walls. Can you even imagine? At a slow pace, this would take probably 30 minutes to bike through, but it’s in darkness, half of it is a steep uphill. That would seem like the longest 30 minutes of your life. Your legs would be burning, and you would be biking through a dark tunnel that seemed infinite. It’s only at the very end that you can see a light. If I did it, I would fear that I had been transported to Hell, or at least Purgatory. If someone made me bike that tunnel, I probably wouldn’t speak to them for a week.

Above ground, in Klasvik, I searched for yarn yet again, but both Faroe Islands and Icelandic wool is extremely scratchy, and I’ve been spoiled by super-soft merino wool yarn made in other places. I didn’t want to buy wool and make something too itchy to wear. We ate lunch at a coffee shop that had huge open face sandwiches and delicious cakes.

We visited Christianskirkjan, a church built in 1963, but in the old style of Viking halls of upright staves. The baptismal font is a 4000-year-old stone-age offering vessel. An old 8-person rowing boat with overlapped strakes, also in the Viking style, is suspended from the ceiling. This is the old boat that the priest used to use to travel between the islands to conduct masses.

One of the funny things we noticed in the Faroe Islands is that the hill peaks always collect a cap of cloud, even on sunny days. In Klaksvik, we saw one of these forming: as cool wet air from the fjord hit one of the hills, it was forced upward and turned into a cloud–we could see clear air become cloud.

We returned to Torshavn on an afternoon class and went to Crossfit Tvormegi in Torshavn, where the coach kindly gave all of his instructions in English for us and I push-pressed 15kg more than any other woman there. *bicep emoji*

The star of that day was dinner, a 9 course tasting menu at Koks, considered one of the best restaurants in Europe. The chef has set himself the challenge of making the meal almost entirely from local Faroese ingredients.

Most ridiculous photo collage ever. Following one of the best meals ever. @koks_restaurant completely deserves the reputation it has earned.

I can’t identify all of the dishes here, but the dishes I do remember were:

Next:Iceland! I won’t be recapping the Iceland side of the trip in quite as much detail, but will definitely hit the highlights. Coming soon!

A Day In the Life