I went to Ireland!

The last time I was in Ireland was 11 years ago. In Ireland, my now-husband (hereafter known as the Wanderer) proposed to me, as we were walking back over the Rock of Cashel to get lunch at a pub. This was after I had made innumerable “Welcome to The Rock” jokes in a bad Sean Connery accent, because I am a KEEPER, y’all.

Now that I am setting my own schedule, when I found out the Wanderer planned to attend a conference in Ireland, I thought I’d tag along and get some research done. THE SEA QUEEN, the sequel I am currently writing, has some scenes set in Viking-Age Dublin, and there’s no substitute for seeing a place in person, even after 1200 years have passed.

I also wanted to see The Book of Kells at Trinity College, which historians think was probably created in Iona, a Scottish island, at a monastery founded by an Irish saint, and then moved to Kells to protect it from Vikings.

I had one full day in Dublin, so I went to see The Book of Kells first, and also got to experience the wonder of the “Long Room”, the Ur-Library, the library of which all others are poor copies. 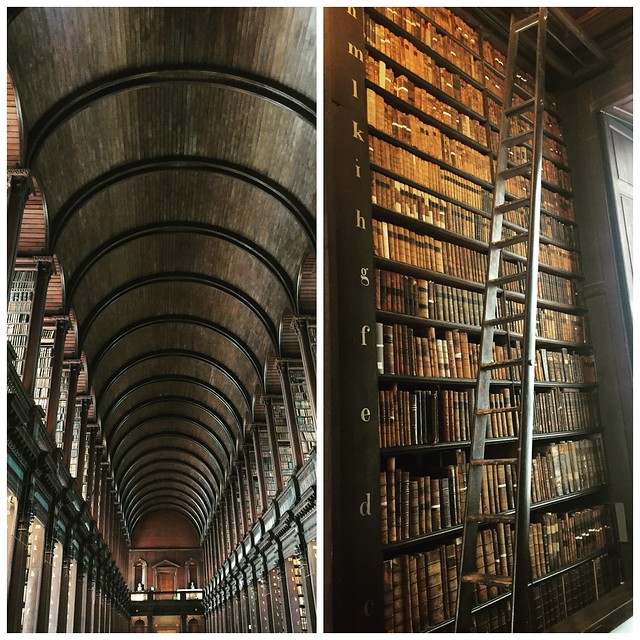 Next I visited the Museum of Archaeology and History, which is full of Irish treasures from the Neolithic Age through to the Medieval period. The Bronze Age material impressed me most. Ireland was one of the wealthiest areas in Europe at that time, and the weapons and decorative arts reflect that. The museum also contains several of the famous bog bodies, Bronze and Iron Age corpses discovered in Irish bogs in the 19th and 20th centuries, preserved by the bogs so that archaeologists can learn about what food the people ate, and what injuries they suffered before they died.  The Bronze Age Irish practiced human sacrifice, especially of their kings. One body had its nipples mutilated, which was done, apparently, to disqualify the man from kingship. Because suckling at a Bronze Age king’s nipples was a common way for his subjects to show submission. Such a weird and fascinating detail! Almost too weird to put in a novel, if I ever write something set in Bronze Age Ireland. But too interesting to forget. 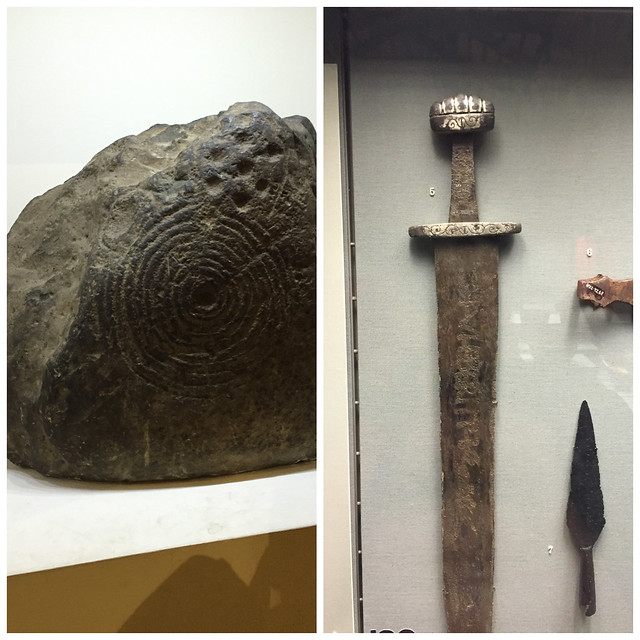 After a mediocre lunch (don’t order a burger in the British Isles unless you like them burnt), I went to Dublinia, a somewhat kitchy but still worthwhile tour through Dublin history from the Viking Age through the Norman invasion. Dublinia contains computer simulations of the layout of Viking-Age Dublin which will be very helpful for writing about it. Also recreations of the inside of Dublin Viking houses, which were probably smaller than the high-born houses I am familiar with in Norway and Denmark.

After that I relaxed on the grounds of a church and listened to the bells while reading In Search of Ancient Ireland: The Origins of the Irish from Neolithic Times to the Coming of the English by Carmel McCaffrey. All of this makes me want to re-read Morgan Llywelyn’s retellings of Irish myths, which I haven’t read since high school–she does a nice job of bringing reality to the magical tales of Cuchulain and Finn Mac Cool.

The next day we took a bus to Cork and spent a few days there in the slightly more modern world, including visiting the Cork Butter Museum, which, sadly, contains no butter sculptures. I really wanted to quote this exchange from The West Wing. (I did anyway.)